Ordered before 12:00, shipped the same working day free shipping from €50 in NL

WHAT IS CBG OR CANNABIGEROL

The world of cannabinoids is developing rapidly! As a result, more and more research has been done into MEB in recent years. The abbreviation CBG stands for cannabigerol, for many of us still a relatively unknown substance. Yet CBG was discovered in 1965 by two Israeli chemists. This substance is produced by all cannabis plants and is used in the plant as a kind of building block for other active cannabinoids. In addition, CBG, like many other cannabinoids derived from hemp, offers a positive effect on the human body.

WITHOUT CBG, THE MOST KNOWN SUBSTANCES FROM HEMP WOULD NOT EXIST.

CBG oil is a natural oil that is obtained from legal hemp plants and, like CBD, has no psychoactive effect. CBG oil is therefore also suitable for the human body and animals. However, CBG is a very special substance, as it is the precursor of cannabinoids such as THC and CBD. After the plant has produced cannabigerolic acid, it is transformed under the influence of enzymes into another cannabinoid such as THC-A, CBD-A or CBC-A. When the plant blooms, virtually no CBG remains in a hemp plant afterwards. So when there is a lot of CBG in a plant, the plant will not yet contain a high content of CBD and THC. Without CBG, the most well-known substances from the hemp plant would not exist.

HOW DOES CBG WORK?

Unlike CBD and THC, which lend their effect to the interaction with CB1 and CB2 receptors of the body's own endocannabinoid system (ECS), CBG acts mainly on the α2-adrenergic receptor. It blocks the absorption of a substance that we naturally produce, called GABA. This inhibitory amino acid is responsible for 'taming' stimuli in the brain. This reduces, among other things, anxiety and stress feelings and the substance acts as a potent muscle relaxer.

CBG AND CBD STRENGTHEN EACH OTHER

CBG and CBD are perhaps even the most valuable substances obtained from the hemp plant. Especially when CBG is combined with CBD, it has a positive effect on the human body but also on our pets. This has everything to do with the entourage effect. A strengthening effect between different cannabinoids. This means that THC, CBD and CBG can enhance or weaken each other's properties. CBD can reduce the psychoactive effect of THC, but CBG actually enhances the effect of CBD. CBG oil is a product with at least as much potency as CBD, especially when a correct dosage is used of these 2 substances together.

MORE AND MORE RESEARCH INTO THE EFFECT OF MEB. 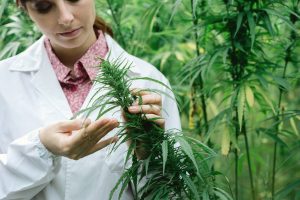 The popularity is increasing and as a result, more and more studies are being done worldwide into CBG. The medicinal effect of CBG is also being investigated in a wide range of disorders. For example, studies are being done in inflammatory bowel disease (chronically inflamed intestines). When using CBG, the intestinal wall would recover many times faster after inflammation. But also mental disorders, muscle problems and chronic pain due to fibromyalgia, for example. In addition, research indicates that CBG can be a positive addition to several therapies, including: anti-fungal, inhibiting keratinocyte proliferation (good against psoriasis) and CBG is effective against MRSA bacteria.

CBG will become as popular as CBD.